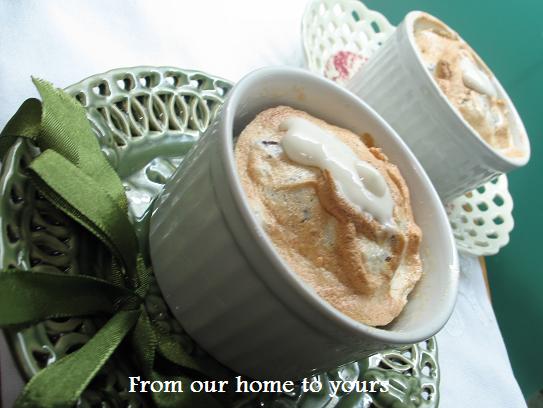 This bread pudding turns into one of the most delicious souffles I have ever eaten. I used leftover italian bread as it was the only bread I had available. The flavor of the sauce is fantastic because of the whiskey (I have used brandy too). I first saw this recipe on Epicurious and then later on the Commander's Palace website, one of the finest restaurants in New Orleans.

My advice is to bake the bread pudding and the sauce in advance. Then, about half an hour before dessert, you bake the pudding again, this time as a souffle. Or, if you do not want to leave your guests waiting while you fix the souffle, you can bake it sometime during the day and then warm it up in the microwave before serving. Your choice, both work wonderfully.

1) Grease the square baking pan. Combine sugar, cinnamon, and nutmeg in a large bowl. Beat in the eggs until smooth, then work in the heavy cream. Add the vanilla, then the bread cubes. Allow bread to soak up custard.

2) Place the raisins in a greased pan. Top with the egg mixture, which prevents the raisins from burning. Bake for approximately 25-30 minutes or until the pudding has a golden brown color and is firm to the touch. If a toothpick inserted in the pudding comes out clean, it is done. The mixture of pudding should be nice and moist, not runny or dry. Cool to room temperature.

3) To make the whiskey sauce, place the cream in a small saucepan over medium heat, and bring to a boil. Whisk corn starch and water together, and add to cream while whisking. Bring to a boil. Whisk and let simmer for a few seconds, taking care not to burn the mixture on the bottom. Remove from heat.

4) Stir in the sugar and the bourbon. Taste to make sure the sauce has a thick consistency, a sufficiently sweet taste, and a good bourbon flavor. Cool to room temperature.

5) To make the meringue, preheat oven to 350°F/180°C. Butter six 6 ounce ramekins. In a large bowl or mixer, whip egg whites and cream of tartar until foamy. Add the sugar gradually, and continue whipping until shiny and thick. Test with a clean spoon. If the whites stand up stiff, like shaving cream, when you pull out the spoon, the meringue is ready. Do not overwhip, or the whites will break down and the soufflé will not work.

6) In a large bowl, break half the bread pudding into pieces using your hands or a spoon. Gently fold in one-quarter of the meringue, being careful not to lose the air in the whites. Add a portion of this base to each of the ramekins.

7) Place the remaining bread pudding in the bowl, break into pieces, and carefully fold in the rest of the meringue. Top off the soufflés with this lighter mixture, to about 1 1/2 inches. Smooth and shape tops with spoon into a dome over the ramekin rim. Bake immediately for approximately 20 minutes or until golden brown. Serve immediately. Using a spoon, poke a hole in the top of each soufflé, at the table, and pour the room temperature whiskey sauce inside the soufflé. 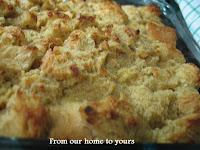 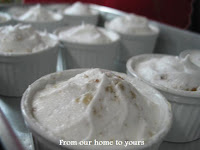 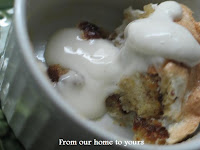 I always think meringue topping adds something special to a dessert. Looks fabulous and is so light.

Cris, I've been thinking about this dessert ever since I saw it on your blog in Portuguese...
Can't wait to have people over so I can make it!

Cris! This looks simply divine! I love bread pudding it is one of my all time favorite desserts and they way you have kicked it up by turning it into a souffle is ingenius! Beautiful beautiful job!

Cris, your pudding looks wonderful! I made a chocolate pudding last night, but yours looked better! Yummy! :)

My grandmother always put meringues on her desserts, too, so I second it making them special! I've never had bread pudding, but it's such a versatile dessert I think I'll have to try it soon. Looks great!

Hi, I was blog-hopping and landed here.
You take such fabulous pics!